Andersen in the UKUK taxThe Study: A Reply

The Study: A Reply

The previous edition of the newsletter contained a self-described “rant” about some research we produced on the effective average tax rate paid by individuals receiving about £100,000 in income and or gains. Given the natural interest that this group is likely to have in the topic, and the mixed coverage (in terms of accuracy) in some of the newspaper articles, we wanted to set the record straight on what we do, and don’t say. You can also read for yourself the research, and indeed from my website you can find the data for all the charts in case you want to look at them yourselves.

Our first finding was that the average share of income paid in tax in practice is much lower than you’d get if everyone paid the headline rate with no deductions, and actually declining at the top. We wouldn’t expect that result to surprise anyone who gets this newsletter – of course you are all aware of the various deductions and reliefs that exist, and of the lower tax rates on dividends. [Aficionados: check out the long appendix if you want a deep dive into what happens when we take into account corporation tax. Short version is not much in terms of our main story, since you should then probably also include employer national insurance contributions].

So why bother saying it? Because before this research we couldn’t quantify how much money is at stake as a result of access to deductions, reliefs, and lower rates. We show it is about £8bn: the revenue equivalent of moving the basic rate of income tax from 20% to 21.5%. That doesn’t mean these are a problem, but if they were worth £100m I wouldn’t think anyone should waste time doing detailed cost-benefit on this. At £8bn they are worth thinking about.

We then also look at including capital gains. Our earlier work showed much of these are repackaged income. Again, people reading this newsletter ought not to be surprised that there are incentives to repackage. Combining income and gains, average rates paid are much lower, and quantitatively this is large: if people received those gains but paid headline rates there is a further £12bn at stake (see fig).

We say clearly that this is a static estimate, and should not be treated as money that could just be collected, but again highlights that if a government is thinking about reform, there is serious scope here. It is also not especially radical to suggest gains taxation (with suitable rate of return allowance) be aligned with income tax rates: Nigel Lawson did this in 1988, and the IFS called for it a decade ago in the Mirrlees Review. 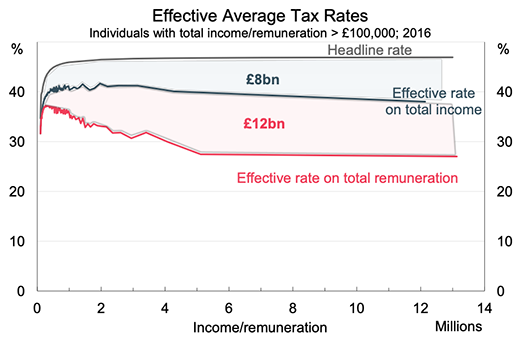 It is also important to say, as we do in the report, that this isn’t about taxing “the rich”. Too often the public conversation about tax goes straight to the rich should pay more taxes, and then a discussion about how high the top rate of tax should be. But this misses a crucial point: people with high incomes, or high remuneration (incomes plus gains), are very heterogeneous. About a quarter of those with remuneration above £100k currently pay at or close to the headline rate. But the median person doesn’t. And some people pay very low rates (see fig). 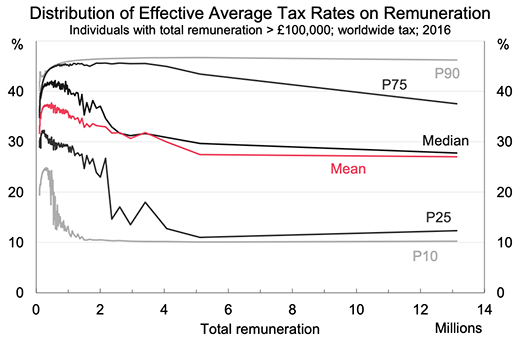 Politicians can, and will, make up their own minds about what they deem to be fair. We have no strong opinions, and no special expertise, to pronounce on questions of fairness. But it is important to know that raising top tax rates will be concentrated only on a small subset of those who have high remuneration (picture just for income is in the report), so if they decide they want more revenue and they decide they want it from some definition of “the rich” then the headline rate isn’t the only, or necessarily the best, instrument.